SCOPE Webinar on Will, Nomination & Inheritance

During the interaction, the eminent panelists led by Justice Rajiv Sahai Endlaw highlighted issues pertaining to succession and its peculiarities including formation of Wills, division of inheritances, care to be taken for avoiding litigations on Will, legal framework on nomination & inheritances and rights of minors. Many queries of participants regarding inheritance documentation, nominations and rights of minors were also taken up by the panelists.

Mr. Atul Sobti shared that the havoc caused by the pandemic was an eye-opener towards inheritance and legal formalities. He added that the lack of clarity and clear documentation further made the life of surviving members tough and therefore this webinar aims at providing precise information in this regard.

Mr. Adika Ratna Sekhar said that the theme of the webinar was apt in the present scenario and further reiterated Justice Endlaw’s suggestion to create Will depository with the help of PSEs in the country. 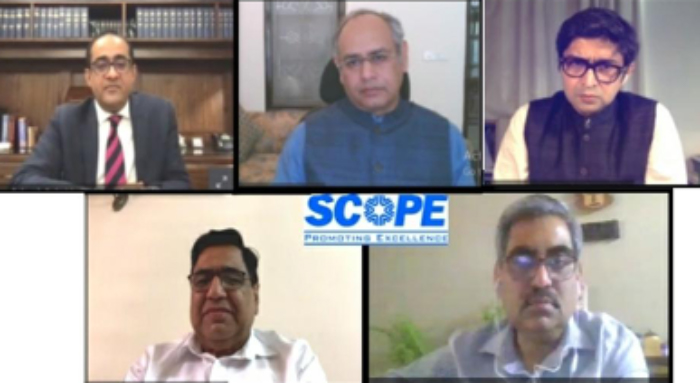 Standing Conference of Public Enterprises (SCOPE), the apex body of Public Sector Enterprises (PSEs) organised Webinar on ‘Issues in Arbitration and Future of Virtual Hearings.’ The webinar was addressed by distinguished experts including Justice Vibhu Bakhru, Judge, Delhi High Court, Mr. Gaurav Pachnanda, Senior Advocate, Supreme Court and Mr. Shourav Lahiri, Barrister-at-law, London. Mr. Atul Sobti, Director General, SCOPE gave the opening remarks and Mr. Anuj Aggarwal, Member (HR), Airport Authority of India gave the closing remarks . The webinar, 7th in the series, deliberated upon critical issues of arbitration arising in Public Sector Enterprises (PSEs) and how the disruptions due to COVID 19 are being converted as opportunities to explore technological and digital means to conduct hearings. The interactive session received an overwhelming response as over 500 participants including board members, Legal heads and other senior members of PSEs attended. Participants were also apprised about the role of SCOPE Forum of Conciliation and Arbitration (SFCA) in institutional arbitration.

Justice Vibhu Bakhru in his address stated that law metamorphosises itself all the time and in the times to come, arbitration is bound to grow and develop as it ensures expeditious disposal of cases. He emphasised that for arbitration to succeed as one of the modes of dispute settlement, institutions like SFCA need to be strengthened. He added that virtual hearings in arbitration are a reality and despite the challenges being faced, arbitrators need to train as it may soon become the norm.

Mr. Pachnanda spoke about how law in India has developed with respect to unilateral appointment of arbitrators. Speaking about virtual hearings, he said the true challenge lies in the context of trials and lawyers will require both time and practice to become comfortable with it.

Mr. Lahiri in his address spoke about International best practices being followed for selection of arbitrators and added that in International arbitration, virtual hearings have been followed for a long time as they expedite the process and are cost effective.

Mr. Atul Sobti in his address highlighted that India has improved in Ease of Doing Business rankings as Government has taken a series of steps to make India an investment hub but steps need to be taken in area of enforcing of contracts. He also spoke about SFCA’s role and future of arbitration through virtual arbitration. 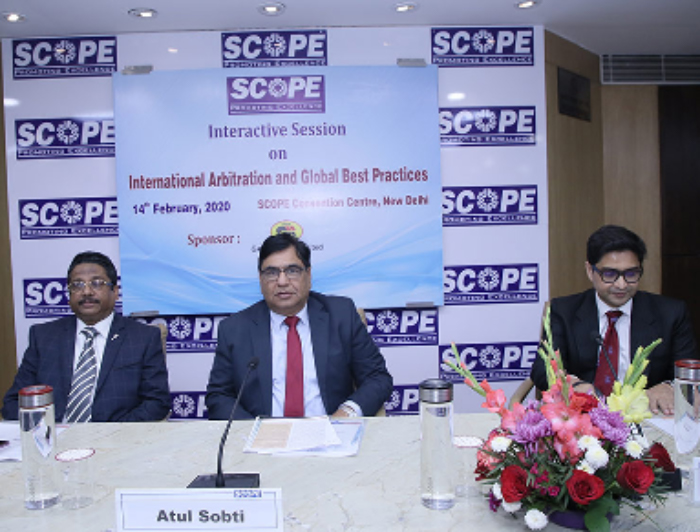 Speaking at the seminar, DG, SCOPE said Arbitration plays a major role in making a country an investment hub as faster resolution of disputes can help achieve investor confidence. He emphasised that with the increased volume of International trade, PSEs need to constantly update their knowledge of International arbitration.

Shri Lahiri shared Global Best practices in drafting, preparing and winning arbitration and encouraged the participants towards understanding and adopting settlements before going to arbitration to save time and resources.

ED (Law & HR), GAIL shared his view on the need to understand and learn from Global best practices to efficiently overcome the challenges in the field of arbitration.

India poised to be the global hub of Arbitration- MoS, HI&PE at SCOPE National Seminar on Arbitration 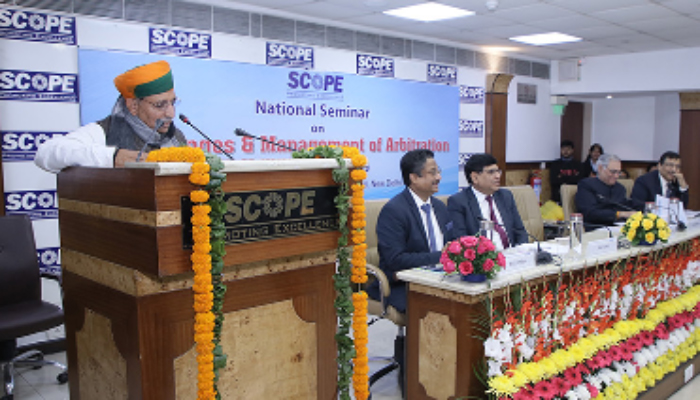 In his inaugural address, Shri Meghwal said that Arbitration & Conciliation (Amendment) Act, 2015 and 2019 by the Government of India are clear indications of the Government’s vision to make India a hub for arbitration. He congratulated SCOPE for conducting the seminar and urged Public Sector Enterprises (PSEs) to create more effective arbitral mechanism which would also help India in further improving its ease of doing business ranking.

Former Secretary, Law in his keynote address advised to expedite arbitration procedure and expressed his pleasure about inclusion of arbitration in contracts of PSEs. He also said that institutional arbitration should be given more importance than ad-hoc arbitration and for that to happen we need to increase the confidence of corporate.

DG, SCOPE in his address expressed concerns on number of pending cases and said that arbitration can not only save time but also money of PSEs. SCOPE Forum for Conciliation and Arbitration (SFCA), he added, is an apt, cost & time efficient platform for PSEs to pursue their arbitration and conciliation matters. He also said that enforcing contract is key concern for PSEs.

CMD, MTNL proposed the Vote of Thanks and highlighted the growing challenges in the field of arbitration. Dr. Mitra presented the program perspective.

The seminar was attended by over 80 senior executives from 30 PSEs.