Given the fact that PSEs are involved in hard to abate sectors creating an inherent impact on the environment, SCOPE has collaborated with GIZ to raise awareness and creating capacities of PSEs towards global Climate Change Mitigation through studies & research, workshops, pilot initiatives and e-certification course.

Mr. Gurdeep Singh stated that Climate Change is invariably one of the most pertinent topics today and enunciated that though PSEs are undertaking individual actions, there is need for synergised efforts for which SCOPE can create a confluence of ideas by PSEs towards achieving various sustainability targets as a nation.

Mr. Agrim Kausal addressed the participants by appreciating SCOPE on the apt timing of the study as Climate crisis is among topmost concerns globally and encouraged participants to analyse and prepare pathways for a green plan.

Speaking at the launch, Mr. Atul Sobti emphasised that this study is a game changer and not a mere a desk study. He emphasized that besides skill enhancement, a pipeline of activities in the form of Compendium and short features to highlight the innovations and initiatives towards reducing carbon footprint by PSEs is also being developed.
Mr. Mohamed El-Khawad stated that as Climate Change impacts the triple bottom line of business which is economic, environmental and social so PSEs need to be involved strenuously for which this study is an important referral point.

Calling GIZ-SCOPE collaboration an imperative step in Indo-German partnership, Dr. Steffen Koch said that PSEs through efforts like low Carbon emissions have been meeting strategic climate targets but as they are strategic for the nation’s climate agenda more needs to be done.

Giving the closing remarks, Mr. O. P. Singh, congratulated SCOPE for the launch of a very critical study and emphasised on synergising efforts of PSEs.
Mr. Santanu Roy delivered the vote of thanks and complimented SCOPE on a very important study.

On the occasion, Ms. Anuradha Prasad complimented SCOPE-ILO on undertaking the study on a very topical subject. She further shared that while the Govt. has notified Draft Model Standing Order 2020 under the Industrial Relations Code for Service Sector in which specific provisions have been made for Work from Home(WfH) subject to specified conditions and as detailed guidelines need to be evolved, SCOPE –ILO study provides a very useful starting point for such guidelines and policy.

Ms. Dagmar Walter stated that the study is a landmark moment in SCOPE- ILO association and has reiterated the need for creation of an inclusive workplace to upsurge women participation in workforce.

Calling it a proud moment for SCOPE, Ms. Soma Mondal said that PSEs have time and again instantaneously responded to the transformations at workplace and the pandemic was no exception. She added that the report gives an optimised insight into how women workforce are managing this new normal.

Mr. Atul Sobti stated that this is a path breaking study where highest number of public sector women employees participated. He added that the report is an important step towards developing Gender inclusive work policy in PSEs that facilitates equal opportunities to women workforce. He called for creation of better opportunities to encourage more women at work and also advised senior management to gain insight from the Study and Guidelines launched.

Ms. Sanchir Tugschimeg commended the active and consistent effort of SCOPE and ILO encouraging deeper insights into this new reality at work.

Mr. Ranjan Mohapatra said that PSEs may circulate and look at active adoption of the guidelines customised to their organisational needs s WfH is a perennial reality today.

As the pandemic has been catalyst in adopting WfH arrangement, the SCOPE ILO study offers detailed insights about advantages and challenges of WfH after administering surveys including key informant interviews (KIIs) and one-on-one interviews with Senior Management including CMDs, Heads of HR and other executives. A record number of 1969 women executives in PSEs were interviewed to reckon the ground reality of the situation. The report also proposes a set of recommendations streamlined into guidelines for gender sensitive work from home policy in PSEs. 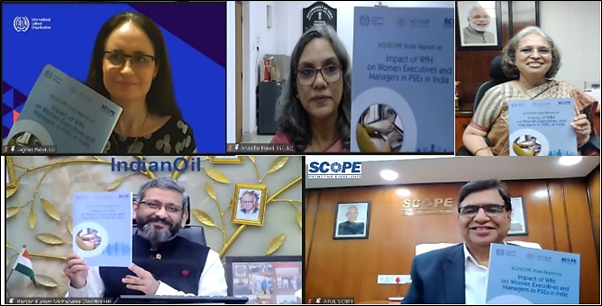 SCOPE and ILO to undertake a joint study on Women Empowerment

The key objective of the study is to analyse and train women in Public Sector in order to empower them and motivate them to aspire to positions of leadership and management by addressing challenges faced by them at work. The study succeeds an earlier study of SCOPE & ILO whereby a team of Network of Champions was developed to train women in Public Sector on different aspects.

The MoU aims at conducting a study on assessing the prevailing leadership gaps and curating a learning module on developing effective and efficient leaders in the Indian Public Sector. The study shall adopt a qualitative and quantitative research methodologybased on responses and experiences of the present leadership which would be further analyzed to identify relevant skills, mind sets, and experiences for future-fluent PSE leader in India. 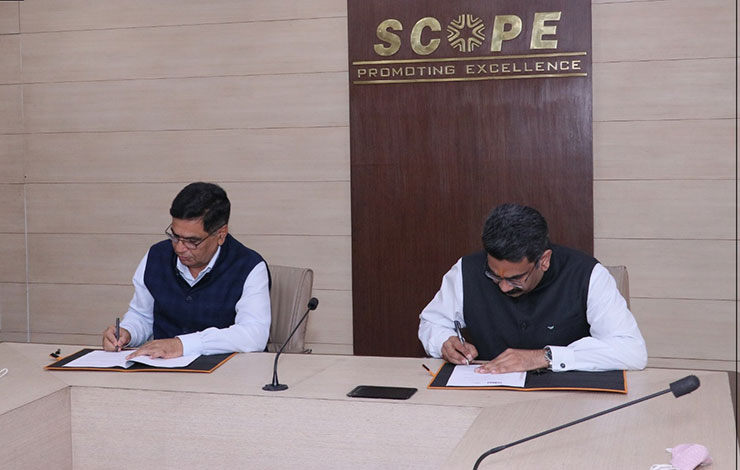 While addressing the participants, DG SCOPE raised concerns over reduction in proportionate employment of women in PSEs and said that this issue can be resolved by key aspects of ‘Attract, Retain and Engage’. He said that organizations need to change their mindset and utilize woman’s capability of team dynamism and multitask to the benefit of the organization and society at large. He opined that need of the hour is to strategise towards effective engagement of women at the work place thereby encouraging them to be efficiently employed. He reiterated that policies such as flexible working hours, matching job profile with requirement and aspirations of the women employees etc. would encourage women to effectively contribute to the organization. He concluded by saying that organizations need women more than women need organizations.

The program perspective and preview was given by Mr. Ravi Peiris, Senior Specialist Employers’ Activities and Dr. Malika Basu, Consultant of ILO. The event was attended by senior officials and employees of PSEs, SCOPE and ILO. 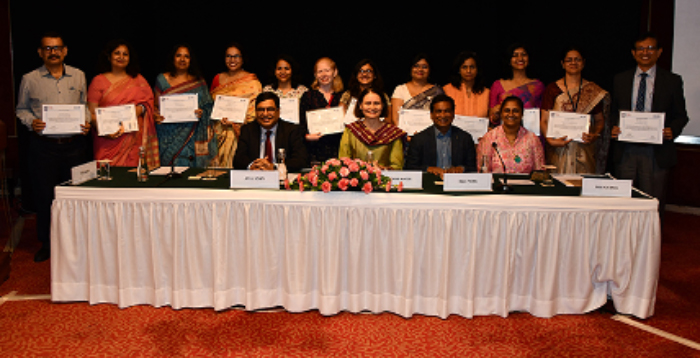