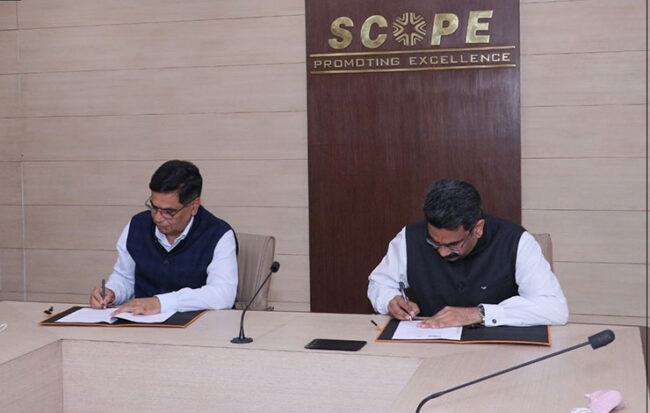 The MoU aims at conducting a study on assessing the prevailing leadership gaps and curating a learning module on developing effective and efficient leaders in the Indian Public Sector. The study shall adopt a qualitative and quantitative research methodologybased on responses and experiences of the present leadership which would be further analyzed to identify relevant skills, mind sets, and experiences for future-fluent PSE leader in India.

Mr. Atul Sobti, Director General, SCOPE in his address said that AGLP is a flagship program of SCOPE which has been creating global leaders in public sector enterprises. The Program aimed at capacity building of leaders at strategic level who are responsible for accelerating industrial growth of CPSEs in a globally fast changing business environment.

Mr. Sobti said there are challenges confronting the CPSEs today and we must proactively address them in order to keep our CPSEs competitive and in sound health. He urged CPSEs to identify strategic opportunities and risks, and steer the strategy execution process with focus on discipline and effectiveness.