Reckoning the gigantic impact of Climate Change and need for building capacities towards its mitigation, Standing Conference of Public Enterprises (SCOPE) & GIZ, Germany, a German public-benefit federal enterprise, organised a series of workshops across the nation for developing climate resilient pathways and green skills as per international standards.

Acquainting upon various facets of Climate change mitigation imminent for a sustainable future, these workshops held in New Delhi, Bhubaneshwar, Bengaluru and Mumbai brought together participants from PSEs in every nook and corner of the country to gain insight on topics such as Climate Policy, Climate leadership; Carbon Pricing; Carbon Markets; Climate finance, amongst other issues. These workshops were built upon SCOPE- GIZ’s comprehensive report on ‘Low Carbon and Climate-Resilient Pathways for Indian PSEs.’

SCOPE, an apex body of Indian PSEs, in the recent past has undertaken a series of studies, research work on various subjects including Climate change, women empowerment, leadership, digital transformation among others.

SCOPE & GIZ, Germany recently launched a comprehensive report on ‘Low Carbon and Climate-Resilient Pathways for Indian Public Sector Enterprises- Training and Capacity Needs Assessment’ to address the ways and means for building capacities for developing climate resilient pathways. To initiate the implementation of the Report and identify actionable roadmap for PSEs, whose presence in hard to abate sectors makes them a pertinent part of the Climate Change action plan of the nation, SCOPE and GIZ organised training workshops across the four regions of the country. The last and final training session was held recently at Mumbai on 13th and 14th June, 2022, where participants from various CPSEs attended the workshop on Low Carbon and Climate-Resilient Pathways for Indian PSEs. The other workshops were organised in New Delhi (Northern Region); Bhubaneshwar (Eastern Region); Bengaluru (Southern Region). They provided participants insights into various facets of Climate Change Mitigation such as Climate Policy, creating climate leadership journey; understanding Carbon Pricing Initiative; Carbon Markets; Climate finance among others. Endeavouring to highlight the Climate Change Mitigation efforts of PSEs, SCOPE will continue to undertake various activities that not only represent the steps being taken already, but also the road ahead. 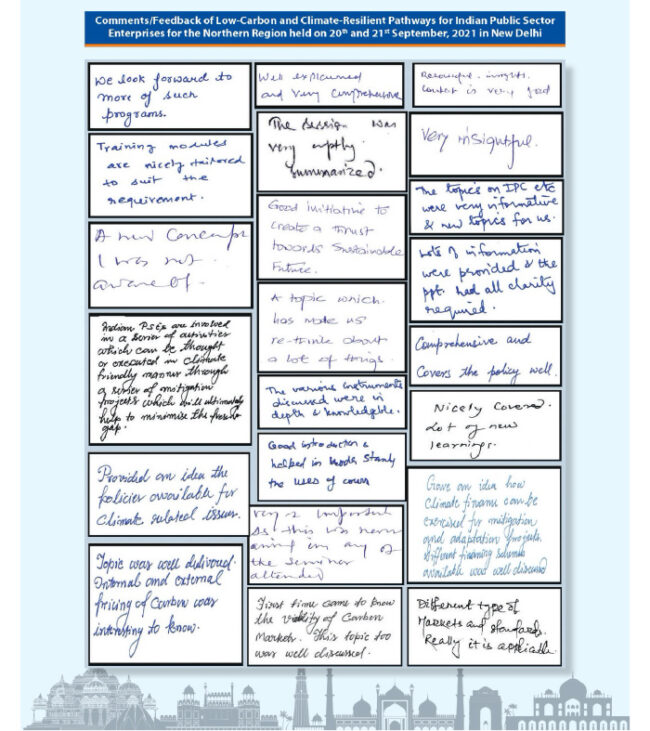 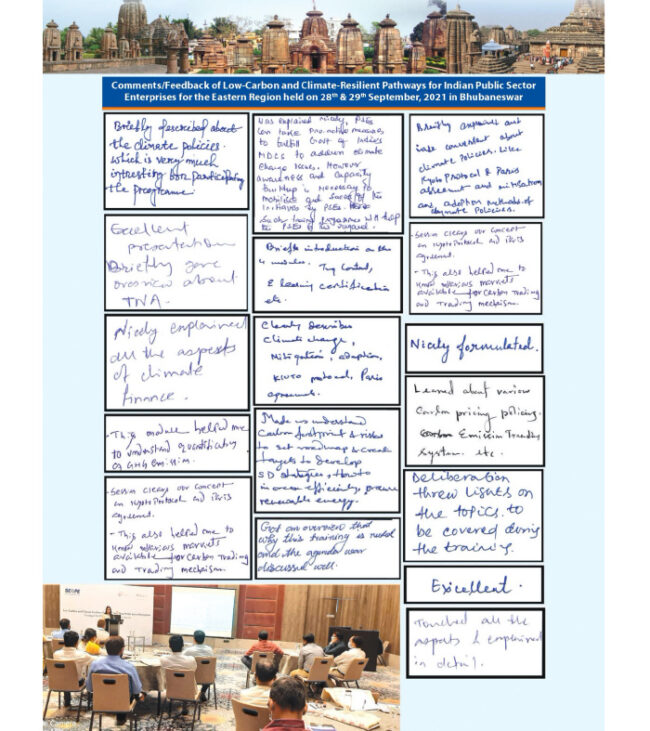 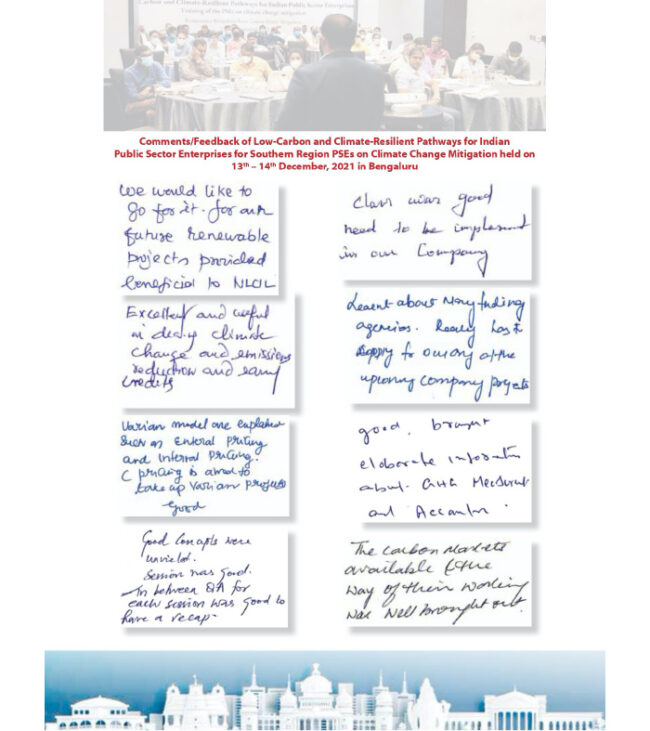 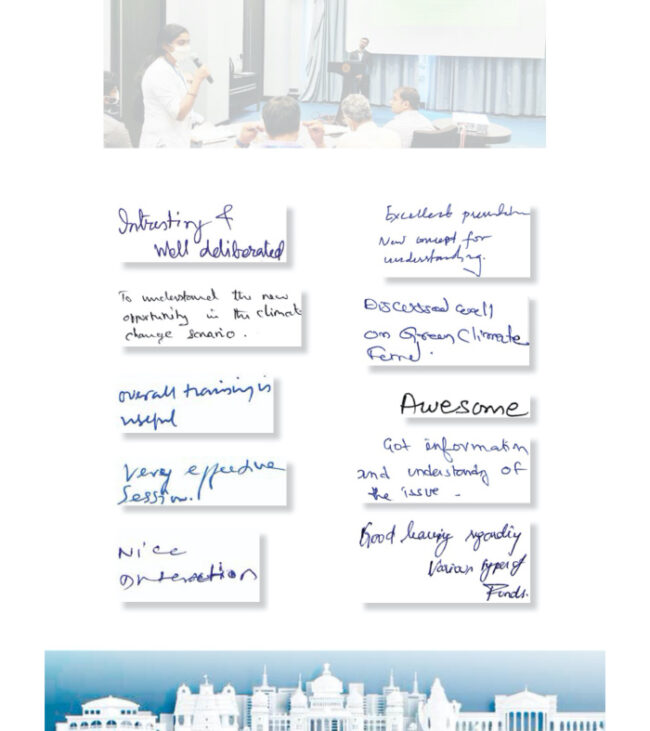 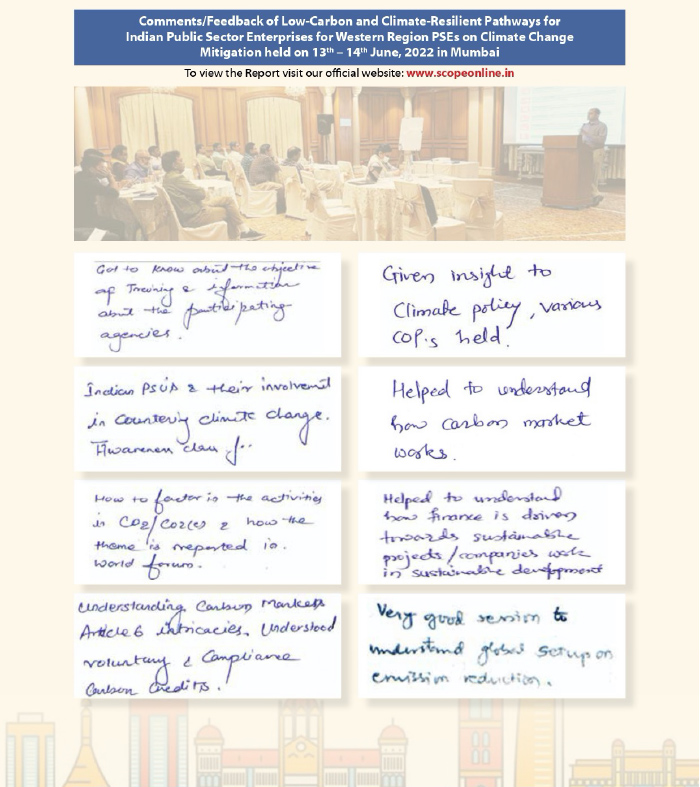 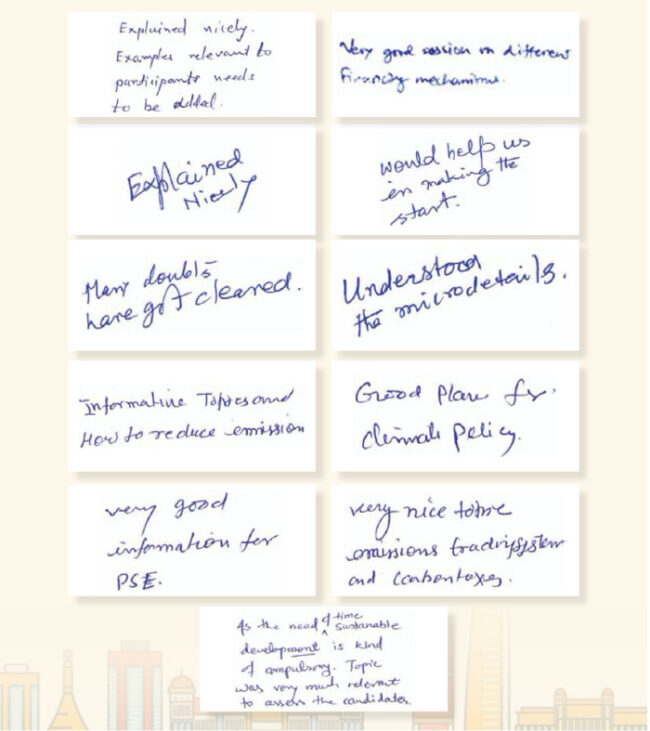 Given the fact that PSEs are involved in hard to abate sectors creating an inherent impact on the environment, SCOPE has collaborated with GIZ to raise awareness and creating capacities of PSEs towards global Climate Change Mitigation through studies & research, workshops, pilot initiatives and e-certification course.

Mr. Gurdeep Singh stated that Climate Change is invariably one of the most pertinent topics today and enunciated that though PSEs are undertaking individual actions, there is need for synergised efforts for which SCOPE can create a confluence of ideas by PSEs towards achieving various sustainability targets as a nation.

Mr. Agrim Kausal addressed the participants by appreciating SCOPE on the apt timing of the study as Climate crisis is among topmost concerns globally and encouraged participants to analyse and prepare pathways for a green plan.

Speaking at the launch, Mr. Atul Sobti emphasised that this study is a game changer and not a mere a desk study. He emphasized that besides skill enhancement, a pipeline of activities in the form of Compendium and short features to highlight the innovations and initiatives towards reducing carbon footprint by PSEs is also being developed.
Mr. Mohamed El-Khawad stated that as Climate Change impacts the triple bottom line of business which is economic, environmental and social so PSEs need to be involved strenuously for which this study is an important referral point.

Calling GIZ-SCOPE collaboration an imperative step in Indo-German partnership, Dr. Steffen Koch said that PSEs through efforts like low Carbon emissions have been meeting strategic climate targets but as they are strategic for the nation’s climate agenda more needs to be done.

Giving the closing remarks, Mr. O. P. Singh, congratulated SCOPE for the launch of a very critical study and emphasised on synergising efforts of PSEs.
Mr. Santanu Roy delivered the vote of thanks and complimented SCOPE on a very important study. 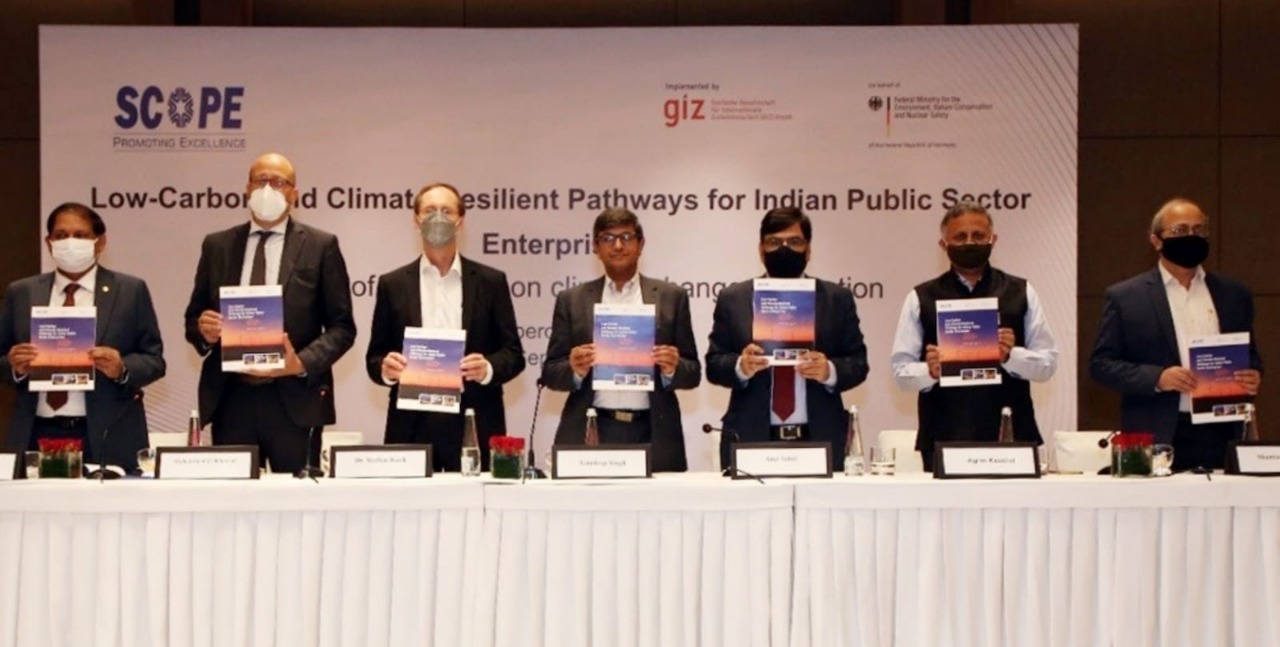 While the earlier association was more centric towards building capacities in PSEs, the present MoU signed by SCOPE and GIZ seeks to explore and support implementation of studies and pilots in Public Sector Enterprises on climate and sustainable development related issues. Signed virtually, the collaboration shall engage in a series of activities in the areas of SDGs, carbon markets and climate finance amongst other issues pertaining to climate change mitigation. 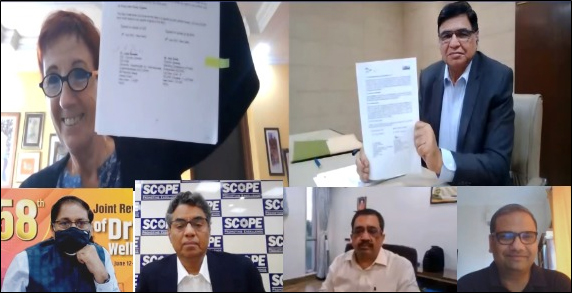 Standing Conference of Public Enterprises and GIZ Germany, a German public-benefit federal enterprise, announces the launch of capacity gap assessment study for PSEs in India to build their capacity on issues related to climate change including climate policy, finance, and carbon pricing. The study shall be followed by a training module which will be developed based on the pre-assessment survey and review of national and international best practices to mitigate carbon emissions. The study and training module is being developed under a Memorandum of Understanding (MoU) signed between the parties.

This is a significant step amidst the urgent need to address the universal challenge of climate change. The capacity building exercise shall focus on creating general awareness amongst PSEs on issues and concerns pertaining to climate change while developing sectoral mitigation strategies for PSEs to improve their understanding, willingness, and capacity on climate change. The study would ensure achieving efficiency in resource utilization leading to reduction in greenhouse gas (GHG) emissions and integration of policies and measures on climate change at the corporate level so as to improve the GHG mitigation potential. 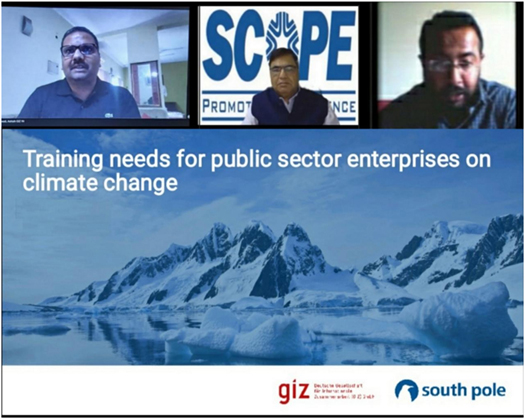 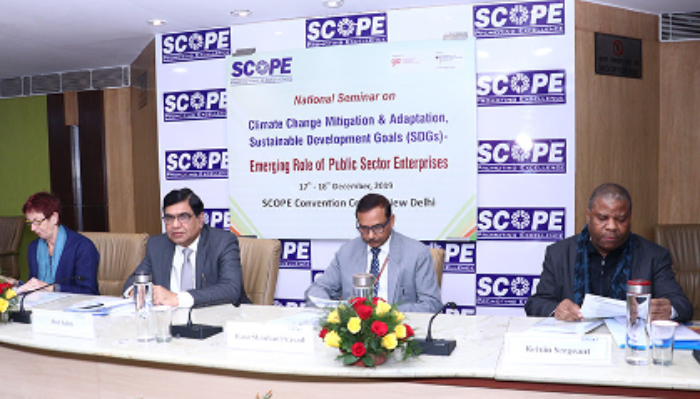 The Seminar saw a host of sessions on understanding Indian Climate Change Policy & International negotiations; low carbon growth and decarbonization of key sectors; carbon pricing and carbon finance among many other interesting topics. PSEs are adapting to new ways of business in the changing ecological balance of the world, adapting new technologies to not only ensure it's sustainability but also act as a role model for society to deal with climate change and saving planet earth for future generations. 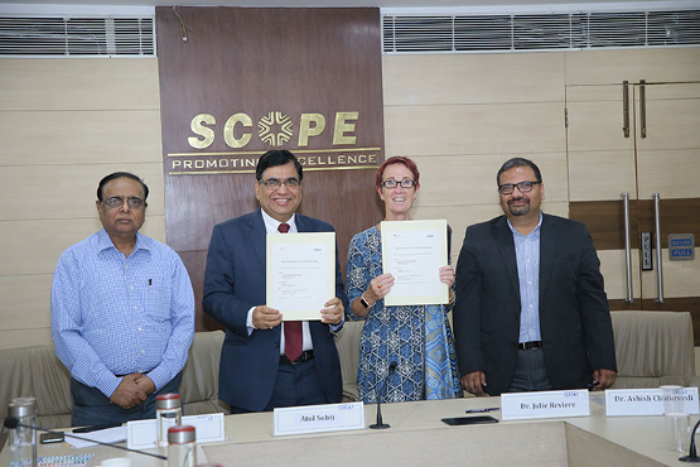 The objectives of MoU seeks to align Public Sector Enterprises with the national mission of environment protection and enhance their capacities in various areas and approaches related to climate change including identifying alternatives for Single use Plastic. The MoU also seeks to explore possibilities of working with other Asian countries to exchange best practices and promote the cause of greener environment.