The Academy of Public Sector Enterprises (APSE), is a unique initiative of SCOPE, and has been established as a non-profit wing of SCOPE, considering that, training and capacity building of employees are integral to the growth and sustainability of a business entity in the highly competitive environment, and with the objective of providing a platform for manpower development at centralized point for capacity and competency building of Executives of Public Sector Enterprises. APSE aims to provide insights into Public Sector background, culture, ownership structure, policy aspects and global perspectives on technological advances, operational proficiency, financial markets, human resource development etc. The vast potential of Public Sector needs to be further leveraged by upgrading the capacity and competence of its critical mass at par with the global standards.

The long-term visions is all round capacity building for meeting global competitiveness and create values for all stakeholders. It is also being considered to undertake a master’s program in Public Sector Management with the ultimate goal of creating a talent pool within the Public Sector for better succession planning.

To establish an Academy with state-of-the-art facilities and support services for development for manpower and capacity building and create a talent pool of the executives of the Public Sector Enterprises in order to groom competent, efficient managers of all levels capable of taking the Indian Public Sector to greater heights.

Also, an MBA Degree in Public Enterprise Management (PGP-PEM) is being developed in association with the IIM-Visakhapatnam, and hopefully would commence in near future. The PGPPEM would be Public Sector centric and would greatly benefit those working in Public Sector.

With the encouragement received from member CPSEs, the APSE is aiming to develop more programs for executive at various levels, focusing on current day VUCA environment and for providing further cutting-edge skills. The APSE needs to be nurtured by the entire CPSE fraternity to enable it to grow further, and ultimately emerge as a centre of excellence for management of Public Sector.

SCOPE Academy of Public Sector Enterprises (APSE) recently organized 12th Executive Development Program on the theme ‘The Career Journey to Personal Effectiveness and Leadership’ from 22nd – 27th August, 2022. Shri Atul Sobti, DG, SCOPE inaugurated the weeklong program designed to nurture a talent pool of PSE executives in today’s competitive business scenario. Participants from 13 Public Sector Enterprises from across the country attended the program. During the inaugural session, Shri Atul Sobti addressing the participants said that to be successful, one must first know and own their organisation. Being responsible and sincere to their work, he added, will help employees reach the zenith of success, in their careers.

After a weeklong session on career development techniques and how to prepare and face challenges in one’s career, in the concluding session, Shri Anupam Mishra, Director (Commercial & HRD), WAPCOS Ltd. and Member, SCOPE Executive Board distributed certificates to the participants. Also, in his address he said the participants must share their experiences and best practices with each other to learn and adapt for overall development and congratulated SCOPE for organizing the program on such a pertinent topic.

Emphasising on leadership as an important ingredient of success in one’s career, Shri Atul Sobti said that power is not only delegated but also assumed and to truly accumulate power, executives must own their responsibilities and be representative of their organisation’s purpose. He also suggested that after the challenging period of the pandemic, SCOPE APSE’s program was one of the first programs being held in person and participants must utilize it as an opportunity to accrue and exchange knowledge and create a network of peers to share best practices.

Shri D.K. Patel during his address in the concluding session said that participants must adapt to the learnings of the program for personal development and to ascend to greater heights in their career.

Shri Sobti in his inaugural address informed that the long-term vision of the SCOPE Academy is to create a talent pool and a PSE cadre of its own for better succession planning. He emphasized that corporate executives must understand current market and operational challenges and avail the emerging opportunities in transforming existing capabilities into competitive advantage in order to create value for their organizations.

DG, SCOPE said business organizations operating in the competitive environment have to devise and execute competitive strategies to survive and grow. This capacity is contingent on their ability to invest, develop and utilize human capital which is now widely regarded as the primary driver of organizational performance, Shri Sobti added. 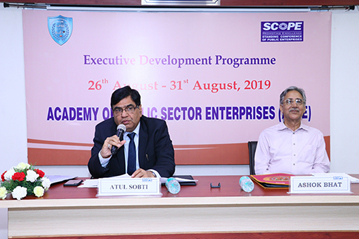 Shri Sobti in his inaugural address stressed upon the need to prepare executives for the volatile and disruptive market environment. He also spoke on various management skills and traits that are required to excel in one’s professional career. DG, SCOPE opined that hard work, constant learning, thinking out of the box and behavioural aspect are four key parameters to become an asset for the organisation.

SCOPE APSE has been conducting several Executive Development Programs. It has been set up to serve as a central institution to address the training needs of member PSEs.